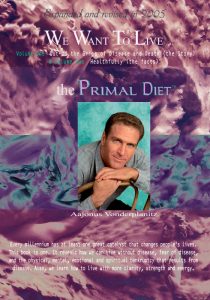 Under copyright reserved above, no part of this book may be reproduced or transmitted in any form or by any means, electronic or mechanical, including photocopying, recording, or by any information storage and retrieval system, without prior written permission from the publisher, except for the inclusion of brief quotations in a review.

“Revolutionary! This is an exciting book. An important book.”

“...a revelation. It is one of the most impressive books I have ever read.”

“...an impressive addition to any health and medicine reference book collection.”

“...fascinating...absolute dedication to finding answers… many, many peoples lives it will empower.”

“This isn’t just about having disease and trying to heal, [but]…getting healthier. Marvelous!

Through this remarkable but true story of Aajonus’ battle to save his son from life-threatening injuries following an automobile accident, we learn how Aajonus healed himself of terminal cancers, diabetes, bursitis and psoriasis. We learn how thousands of his clients have healed themselves of hundreds of “incurable” diseases. All of those miracles were accomplished simply by eating foods prepared in specific ways and in specific combinations. Aajonus shares with us the overall, fundamental premises and practical guidelines that created those phenomenal results.

At last, all of the disappointments and despair that people have endured because of failed medical treatments, “miracle-cure” diets and expensive “magic-bullet” supplements and drug-therapies can be understood and set aside. The revolutionary information contained in this book, culled from over 40 years of medical and naturopathic experience and experimentation, brings new hope and inspiration to anyone who has ever suffered from disease or physical decline, or who wishes to increase their peace of mind, physical and mental vitality, endurance, athletic skills, and happiness.

This book includes a remedy section listing hundreds of diseases and ailments, with specific foods and combinations of foods that people have used to cure themselves. Listed is everything from beauty tips, the common cold and infant problems, to aging, muscular dystrophy, HIV and cancer. Most people who applied the principles of the Primal Diet to their lives reduced their medical bills by at least 90%. Many people eliminated their medical bills entirely. Imagine living a life you control, as well as being healthy and feeling great!

Aajonus Vonderplanitz was a sickly and accident-prone child who also suffered autism that caused learning, attention and social disorders. At twelve he survived his first life-and-death situation from peritonitis that was misdiagnosed and treated as appendicitis. His health continued to decline throughout his adolescence. At twenty, he was diagnosed with blood and bone cancers and given less than six months to live. Medical therapies made him semi-invalid with three new “incurable” diseases, along with the medical death sentence of “three months at best”.

His struggle with diseases drove him to pursue the boundaries of health. He studied and explored every alternative: physical exercise, psychotherapy, positive-thinking, metaphysics, religion, dietary regimes, and vitamin, mineral and enzyme supplement therapies. He obtained substantial results from certain diets.

After his health improved significantly, he traveled for three years on a bicycle laden with his sleeping bag and four saddle bags containing books on health, physiology and anatomy. He adventured the North American continent, living outdoors while studying the diets and healing methods of various cultural groups and animals. He discovered a dietary approach that changed his life and all of his diseases completely reversed. He outlives his medical death sentence now by three decades, and enjoys excellent health.

Mr. Vonderplanitz is based in Malibu, California, USA, and advises people on nutrition all over the world. Disney’s Epcot TV Magazine featured him in an episode entitled “You Are What You Eat” (1983), FOX-6 News featured him in “The Primal Diet” (2005), and Ripley’s Believe It Or Not featured him in the television episode “No Fear of Bacteria” (2002). He fostered nutritional education on several TV and radio talk shows and children’s programs (1979-2005). People all over the world seek his individualized counseling. In 2002, he developed a companion volume of raw-food recipes with extensive scientific support for the Primal Diet entitled, The Recipe For Living Without Disease.

(in order of appearance in my life)

OWANZA'S knowledgeable and experimental contributions to diet over the years, and to the remedy section of this book, have enabled me to reach, affect and facilitate healing of many more people than I would have otherwise. Owanza thought of the simple food formula that alters coma. Not only is she wonderfully insightful, she has been one of the three most generous, kind and loving people I have known. My nutritional mentor Bruno Corigliano, and uncle Lanny Sims are the other two. Bruno and Lanny’s examples showed me how to evolve to the extent that I primarily live free of anger, resentment and self-pity, except when drama is an element of teaching.

Three doctors declared that I would die at age twenty-one after I had received medical treatments for cancer. I began searching, experimenting and exploring other means to gain my health. I discovered that good health most often comes when one eats a diet consisting of foods that supply the most bioactive nutrients; they are mentioned throughout the following pages.

Since I was intent on sharing all that I learned, I became a nutritional counselor and learned more by helping others. The high point of gratification in my work in the health field is the saga that We Want To Live; Volume One, Out of the Grips of Disease and Death tells. It is the battle I waged when the doctors said that my son was on his deathbed.

The author and publisher shall have neither liability or responsibility to any person or entity with respect to any loss, damage or injury caused, or alleged to be caused, directly or indirectly by the information contained in this book.

A few words about this online edition

All the page numbers in this online edition refers to the corresponding pages in the printed book and the old (as printed) PDF. This edition is a work in progress, and links will be added between mentioned sections as well as to the appendixes later on.
The Appendixes can also be read separate from the story, with a short recap of the part that referenced that appendix.

As with the free sample PDF book, the chapters 1-5 (part of the story) are available for everyone, as well as Appendix A-F (as included with the new format sample PDF). Logged in subscribers will have access to the whole book for online reading.

Volume One – The Story