’I leave my blender and food in the car and we walk toward the hospital. The smell of wet grass and drying pavement remind me of the damp day I entered a hospital for my first traumatic stay. A chill passes through me.
It was early spring, the week before my twelfth birthday. I had had a near fatal reaction to my final polio vaccine.’

Allopathic medicine is based on the “germ theory”, that microbes and viruses, cause disease. Medical science bases the use of vaccines on the theory that the body forms antibodies to “fight” natural viruses. They believe that these antibodies live on after the virus is contained, thereby creating immunity.

First we must consider the facts known to evaluate medicine’s viral theory. Science has proved that virus are not alive, that they are predominantly protein but that they contain organic DNA. Science has proved that virus increase only in the presence of live cells, and that they cause certain cells, and/or parts of cells to dissolve. What is believed and taken as fact but not proved, is that viruses are non-discriminatingly destructive “things” that self-replicate. That is like saying that laundry soap, because it is found in homes inhabited by humans, self-replicates. Those assumption and conclusion are shallow and ludicrous. Medical science operates from fear, and it attacks the body. All medical procedures for treating disease are written by pharmaceutical-related individuals and groups. That is a severe conflict of interest. Self-produced health or medication-dependent profit, which do you think that they want?

A rational and logical conclusion would be that virus are solvents (cleansers) manufactured by individual cells to dissolve degenerative tissue (disease) caused by accumulated waste and industrial toxins, including medicines. Virus contain DNA because cells have used substances within themselves to synthesize virus; DNA is a part of that. When the cleansing and healing processes cease, cells stop producing large amounts of virus.

However, when bodies become too toxic with industrial toxins, including medicines, the bacteria and parasites are poisoned to death. Under such toxic conditions, the only cleansing method that the body can utilize is virus. So, cells synthesize viruses. I reiterate, viruses are solvents that dissolve degenerative tissue and organic waste. They are beneficial in preventing disease; they do not cause disease. The symptoms that accompany viral, bacterial or parasitical detoxifications are a necessary process but can be mitigated with the consumption of plenty of raw eggs and raw dairy fats.

The key is: We should trust, nurture and understand the body and Nature, not fear them.

Inoculating people to prevent viral infections is ridiculous and dangerous. After many years of experimentation, Louis Pasteur realized that the idea of vaccination was doomed. He confessed on his deathbed to his assistants that a poor (toxic) environment within the body creates disease. Microbes do not cause disease.

Regarding the immediate trauma that vaccines cause in many people, the eminent scientist and physician, Dr. William F. Koch, M.D., Ph.D. said:

--
”The injection of any serum, vaccine or even penicillin has shown a very marked increase in the incidence of polio - at least 400%. Statistics are so conclusive no one can deny it.”
--

The long term effects of vaccines are just as harmful. Vaccines are made of disease, mercury, aluminum, formaldehyde and other poisonous chemicals. Pharmaceutical houses manufacture diseases in animal tissue. The diseases are sterilized to make vaccines. Sterilization alters the RNA, DNA, structure and actions of diseases and viruses. When a sterilized disease or virus enters the body, the body tries to analyze it and create antibodies to regulate the disease or virus. The body cannot find the logical reason for the unnatural disease or virus. Nor can it find the key to the time that the bacteria or virus will be active. Therefore the body creates mutant antibodies that do not go dormant for up to decades.

These mutant antibodies remain active long after the disease or virus becomes inactive. The mutant antibodies eat sub-particles from the inside of amino acids (proteins) in the blood.
[The nature of the sub-particles eaten from proteins is explained in THE PERSECUTION AND TRIAL OF GASTON NAESSENS by Christopher Bird, H.J. Kramer, Inc., P.O. Box 1082, Tiburon, CA 94920.]
That renders proteins unstable. The amount of proteins damaged and lost to mutant antibodies depends on the number of vaccines. Because amino acids are the primary building blocks of cells, the consequence is cellular malnutrition. In all animals, the malnutrition causes gradual genetic mutations, resulting in weaknesses, diseases, malfunctions and deformities.

The life span of mutant antibodies varies, from at least 1 year (penicillin) up to 50 years (polio).
[The body reacts to antibiotics (like penicillin, tetracycline, etc.) the same as it does to vaccines - that is, mutant antibodies are created.]
Each vaccine multiplies the number of mutant antibodies, which increases cellular malnutrition and results in greater weaknesses, diseases, malfunctions and deformities.

Table 1 shows the reported incidents of polio in the year 1958, before the compulsory polio vaccine law, and the year 1959, when the law was adopted. Only four states and one city kept records. The statistics show that the polio vaccine actually created the disease that it was purported to have prevented. 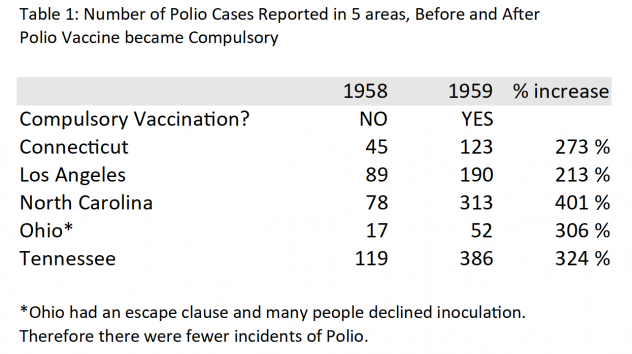 Eighty-two percent of all of the people who had polio in 1959 (listed above) had been vaccinated with one or more polio vaccines. Twenty percent had at least three polio vaccinations. Polio vaccines create polio.

Vaccines have other immediate side effects. There is temporary or permanent paralysis (Guillain-Barre) associated with any type of vaccine, including flu shots. Almost everyone receiving a vaccine of any sort suffers some of the following side effects: blindness, brain damage, convulsions, death, dizziness, other serious diseases, fever, headaches, hepatitis, impotence, irritability, muscular pain and soreness, nausea, skin eruptions and disease, sore throat, stiffness and vomiting.

Former Secretary of War, Henry L. Stimsom, reported that at a military boot camp in only a six-month period, there were 63 deaths and 25,585 cases of hepatitis “as a direct result of the yellow fever vaccine.”

Yet, doctors and pharmaceutical houses say vaccines are miraculous - choosing to ignore the harmful effects. Is it because vaccines generate several billions of dollars a year? Isn’t it frightening that our children are the main target?

I experimented with vaccines in animals (rats, cats, and rabbits) and found that the mutations compounded with each succeeding inoculated generation. In the second generation, with all three types of animals, mutations started as slight deformations of an ear, or eye, or jowl; or a shortened limb; or scoliosis. Glandular malfunctions were prominent. In some animals, temperaments became unruly. In the sixth and seventh generations’ mutations were severe: loss of glands, organs, limbs, features, motor and neural functions; brutal suicidal and homicidal tendencies; and impotence resulting in extinction.

In my experience, of all the pharmaceuticals that are accepted as miracles, vaccines are the most dangerous because the side effects are most often subtle, or attributed to another problem, or ignored. These side effects become obvious after the third and fourth generations. That is when the mutations start to become exaggerated and pitiful. With humans this will probably be apparent by the year 2015.

There are many books on the dangers of vaccines. Read them. I’ve listed the ones I’ve read - both well written and not - in the referens section. See Bibliography, page 340.

While I was experimenting with raw moldy foods as possible remedies for particular health problems, Owanza, who was assisting me, discovered that eating moldy berries affected the mutant antibodies caused by vaccines. She placed raspberries, blackberries and strawberries in separate glass containers with lids that were not tight. She allowed them to sit at room temperature until a healthy mold had formed. Then she placed them, still in glass containers with loose lids, in refrigeration for ten weeks. After these ten weeks, Owanza strained the moldy berries through a porous sieve, separately. The mold-juices were ready for my subjects.

Blood analyses were done on eleven people with long histories of vaccinations, with specific focus on amino acids. All subjects had minor complaints, ranging from headaches to joint pains. For one time only, each person drank ½ cup of one kind of mold-juice - of the particular berry that normally appealed to their taste. Their diets were not altered. Blood analyses were done 30 days after drinking mold juice. Analyses showed an average of 30% increase in stable amino acids over previous analyses. There was only one side effect as a result of drinking the mold-juice - everybody became lethargic for a period of 30 days. After that period, everyone’s level of energy and health increased sharply above what it had been before drinking the mold-juice. Health complaints either diminished or disappeared.

Between 13 and 18 months after they drank the mold-juice, three of the people planned to get vaccinations for travel reasons. Blood analyses were done before inoculations and again a month after inoculations. The post-inoculation analyses showed a 30% drop in stable amino acids.

Twenty-four months after taking the mold-juice all eleven had blood analyses. In eight of them the stable proteins in their blood remained high. In the three who had recent vaccinations, stable proteins were still down and the health complaints that they had prior to drinking mold-juice returned.

Rawesome: One Week After the Raid
More Posts