Dear Aajonus, I have heard so much about superfoods and their benefits. What’s your experience and what do you think about them?
-- Samantha, Montana

Aajonus: Are there such things as superfoods? Gogi berries, cocoa beans, nibs and powder, noni juice and powder, maca root powder, acai berries and powder, hemp seed powder, camu camu berries and powder, green-tea extract, blue mangosteen, cod liver and fish oils, green powders and pills made from green grasses and their juices and algae such as spirulina, and chlorella are all claimed as raw superfoods by many people in the raw-food movements. I found that it is mainly within the vegetarian and vegan raw-food groups that people seek superfoods. It is helpful to understand why they must have superfoods.

Consider that humans have acidic and short digestive tracts producing acidic digestive fluids and harboring acidic bacteria, and 80% of teeth are designed for cutting, extremely similar to carnivores. Herbivores have mainly alkaline and very long digestive tracts producing vast amounts of alkalinedigestive juices and bacteria, and all teeth are molars for grinding vegetation. Rarely are there healthy long-term raw vegetarians and vegans. Usually, the more committed ones hit a wall at 7 years. Others that cheat may spend a decade or two before they hit the wall. Often, the wall is serious disease such as cancer. Half of my cancer patients were long-term vegetarians and vegans.

Ninety-nine percent of human vegetarians and vegans cannot get enough protein and fats, and lack minerals and an array of nutrients from their diets. Ninety-nine percent of their bodies are unfulfilled and unsatisfied. I know from 6 years of subjective and objective experience as a raw “balanced-dieteating vegetarian evolved to vegan.” I and ALL of the vegetarians and vegans I knew were usually malnourished with eating disorders. I adhered to it 99.9% of the time. Others were much less tenacious. However, occasionally, uncontrollably yet consciously, I stretched and contorted what foods were truly raw, trying to force reality to conform to my adopted concepts of vegetarianism and veganism.

I did not realize the irrationality of believing that humans were optimally healthy as raw-food vegetarians and vegans. I had accepted the false information that our digestive tracts were more alkaline like other primates, and herbivores. I was so malnourished, anytime anyone told me about a superfood such as amaranth “grain of Egyptian gods”, I consumed it. However, all such promises of superfoods resulted in my slow but steady deterioration to 96 pounds at 5’8”.

In photograph below, it is easy to spot the Primal-Diet-eating athlete Scott Wheeler of Australia with all of his muscles and stable constitution. All of the other runners are vegetarians or vegans, some mostly raw and some not. Scott won that race at the Raw Games in Hawaii November 2008. 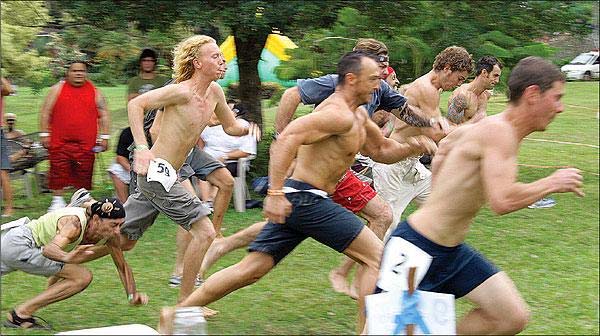 Ninety percent or more of all of currently purported superfoods are processed and not truly raw. They are not fresh so they lack enzymes. Whenever foods are dried, bioactive enzymes are inactivated like a dead auto battery. They cannot be resurrected any more than we can resurrect ourselves from dead. Therefore, even dried fruits are not really raw because they lack bioactive enzymes.

Although Native North American Indians lacked our laboratory sciences, they knew the inferior nature of dried food. They had empirical science called experience. Empirical awareness and knowledge is much more valuable, containing wisdom rather than conclusions based on chemical theories and hypotheses.

Each summer, Native Americans made large supplies of a mixture of dried meat and fat, sometimes adding berries. It is called pemmican. It would be eaten in case they could not find fresh kill. Eating pemmican would prevent starvation, fatigue and bodily deterioration. The process of making pemmican was time-consuming, both hunting and preparing it by drying, beating it until it became flour, soaking it in the sun with warmed fat, drying it in the sun and sitting near it and occasionally pressing it into 90 pound dried hard blocks. By spring, if they did not consume it, they buried it because they knew it would not be optimum for their health.

Let’s take a look at the processes that so-called superfoods undergo to see if they are truly raw. Noni juice is chemically or heat processed to prevent fermentation in bottles. The chemical process utilizes kerosene derivative or alcohol. Both are natural but toxic. All “superfoods” that are powdered must be thoroughly dried so they do not cake and stick in the machines while being ground. When hard foods such as cocoa beans and roots are ground into flour, the machines reach a temperature of at least 176˚ F (80˚ C), cauterizing the foods.

Cauterization seals the food and makes it harder. It is therefore harder to liquefy and takes more time to digest in the digestive tract. Also, any metallic minerals in the foods will be released by the heat and be more toxic. Claims that such foods are 100% raw and have more antioxidants are false, after drying and cauterizing/cooking. They have the opposite effect in varying degrees.

Whole leaf grasses and fruits also have to be completely dried and hardened for powdering. Rarely are any grasses sun-dried. Usually, they are kiln-dried at temperatures above 118˚ F (48˚ C) and up to 138˚ F (59˚ C). They are also subjected to the same friction-heat from machines during the powdering processes that reach at least 176˚ F (80˚ C). They are not raw because all enzymes are destroyed and the food is cauterized/cooked. Also, we are not herbivores that can properly digest vegetable matter, especially when dried. The only exception is chlorella; I have experimented and found it to be somewhat beneficial. Commercial liquid green teas are all steeped in boiling water.

Sometimes, kerosene derivatives, distilled alcohol or other chemicals are sprayed on those foods to breakdown the oils and force them to dry faster. Since kerosene and alcohol are natural, they may legally call the product “All Natural.” They know they mislead consumers and they do not care. Their interest is to supply products for abundant profits rather than produce quality products for which they obtain less profit.

The same is true of acai, camu camu, gogi, and noni. There are many beneficial claims about those foods so most people who consume them believe my analyses of those foods are wrong. However, consider that people feel better because most of those foods are high in carbohydrates and raise the blood and nerve sugar levels causing hyperactivity.

Raised blood and nerve sugar levels are not indications of health. In fact, they are indications of bodily harm. Columbia University found that we store 70-90% of Advanced Glycation End-products (AGEs), byproducts from spent high-carbohydrates, in our bodies for a lifetime. AGEs are cancer feeding byproducts that cause many ill effects, including arterial sclerosis by attaching to venous and arterial walls.

Also, infusions of powders cause increases in hormones such as adrenalin, also elevating energy levels but not to healthful benefits long-term. All endocrine glandular production is for emergency purposes only. For instance, adrenaline is for fight and/or flight. We are supposed to derive our energy from foods that supply fats, proteins with little carbohydrate, rich in enzymes and bacteria. If we were to eat proper raw foods rich in fats and proteins, and digest and assimilate them properly, most of us would have improved energy and stamina. After many years of eating a proper diet, we would develop tremendous energy and stamina. Like primitive Eskimos, we could live happily in the most strenuous climates and environments.

Cocoa beans (cacao), nibs and powder contain theobromine which is similar to caffeine and a nerve irritant. When cooked and/or processed, that neural irritant is a free radical. It often stimulates hormones such as adrenaline, testosterone and estrogen, making people think their new energy is healthful.

The only truly raw cocoa bean retains it moist skin and must be hand peeled. In small amounts it may be briefly ground in a coffee-bean grinder or blender without reaching high temperatures to retain its rawness and nutrition. I discussed the benefits of eating small amounts of raw cocoa beans in the earlier PD newsletter issue Vol. 7, Oct. 30, 2007. I have a correction to that. Cocoa beans do not contain the nerve stimulants/irritants caffeine or theophylline. They contain theobromine of the same family as caffeine and theophylline.

As a civilized race whose members eat processed and chemicalized-food, we require air-conditioning and heat in our homes and transportation to sustain us or we cannot work, play or eat. Our perspiration would reek. So many people I know who exercise reek of old stinky sauces, especially tomato sauces. They have a body odor like the outdoor garbage bin of fast-food Italian restaurants or pizza parlors on a hot summer day. That odor is from chemically produced flavorings and fragrances added to tomato sauces to make flavor and odor consistent. Civilized man is now the weakest organism on this planet.

“Superfood” is a misnomer. All lack enzymes and little can be digested and assimilated. Some contain nerve irritants and other chemicals that cause the body to produce hormones that flow through blood and nerves, elevating a sense of well-being without elevated true health. Therefore, the body's responses to "superfoods" indicate toxic responses. Calling any processed food superfood is the same as calling supplements magic bullets. However, if I were to judge any food as superfood, one would be honey that was unheated above 92˚ F (33˚ C). Another would be bone marrow from completely organically raised animals, fresh and raw in bones.