This article updates how my body continues to detoxify the mass industrial poisons from the abduction and forced injections of April 2009, that resulted from my interviews and information about the H1N1 hoax of that year. I also show the long-term effects on my body.My yearly detoxification of the toxicity from the forced injections started again on the anniversary week, the first week of April, 2012. In Aprils 2011 and 2010, the detoxifications lasted from April into late August. However this year, I am near completion of my injection-toxicity detoxification this first week of July except for my severe brain fog.

I have great difficulty keeping subjects focused and on point. That has been the case every year of these detoxifications. The brain fog usually clears by late August. So, I am struggling to get this newsletter to you. Please understand and forgive my delayed newsletters.

This year's detoxification has been physically mild compared to the last 2 years. The last 2 years, I suffered 5 months of exploding tissue with near constant oozing but rarely puss (white blood cells). If you remember from my yearly posts, I used lime juice, unheated honey, coconut cream or butter, and thin slices of raw meat to help detoxify and heal the wounds when they appeared, and for as long as they appeared, for months. The lime juice prevented the necessity for my body to deprive the blood of many white blood cells which help eat the millions of damaged and/or killed cells during the chemical detoxification. When our bodies are healthy, white blood cells remain in the blood and only consume dead red blood cells, keeping the blood clean. During some emergencies, white blood cells will leave the blood and travel to areas with massive cell destruction and eat the organic waste.

This year, my first symptoms were a few 2-3 mm explosion-like burns on the left side of my neck. The next week, I bled from my left eye, nose and ear for about one week, losing 2-4 tablespoon blood daily. That was enough to cause me to sleep more than my normal 4 hours daily, up to 5-7 hours but not enough to make me anemic. Bleeding lasted only 10 days and was inconsistent. I felt little discomfort in the eye and nose but a lot of pressure and pain in my ear.

To mitigate the pain, I consumed unheated honey, no-salt raw butter and no-salt raw cheese (ratio: 1:2:4 respectively) every few hours as needed. Probably, any of my pain formulas would have worked but for the ear, I preferred the butter/cheese/honey pain formula because it was the least liquid and would help remove fluid from the ear. It worked perfectly.

I rarely experienced pain unless I went 5-6 hours without the above pain formula, or on flights. On flights, pain was intense from altitude pressure that added to the water pressure caused by detoxification.

Remember that the body must have swelling when there is detoxification. Swelling is increased circulation of blood and lymph to the troubled area, increasing nutrients to the area for detoxification and healing.

Because I was traveling so much, lecturing at the time, I did not take many hot-tub baths to help perspire the toxins from my tissues. I remind you that 90% of toxins are supposed to leave the body through skin as evaporation and perspiration.

Usually but not healthfully, skin is blocked with lymphatic waste and congestion that must be melted and moved with heat. Instead of hot baths to help move the plastic-congested/blocked lymphatic system with all of the poisons remaining from the forced injections, I applied 7 hot water bottles while I slept. I did not use electrical heat because electrical heating devices emit enormous harmful electromagnetic fields.

I filled each water bottle with hot water and placed each one inside a separate flannel pillow case and wrapped the excess pillow-case material around the bottle. I took them to bed.

With the covers drawn, I spread three beach towels over the sheets on the area where I would sleep. The towels caught my profuse perspiration while

I slept with the hot-water bottles against my body. I laid myself on my back or face, and placed one hotwater bottle at each of the following locations: between my calves, between thighs, at each hip, in each armpit and one at left-side of the neck and head.

Then I placed another beach towel over me and the bottles to tent the heat into my body and catch rising evaporation from getting into the down quilt cover and making it wet. Then, I drew the down quilt over me, the towels and hot-water bottles. With the bottles inside the pillow cases and under the covers, the bottles remained hot for 6-7 hours.

Sometimes, I did not consume my usual 1 cup of fruit with fat daily because I did not want to increase detoxification. However, when I began smelling acrid chemicals emitting from my skin, especially my hands, armpits and under fingernails, I began making and consuming one quart of smoothie with vinegar daily.

The smoothie helped chelate with the metals from the forced injections. The amino acids in raw apple cider vinegar are excellent for bonding with toxic metals, that is, with the help of berries and a combination of other foods.

I sipped it throughout the afternoon and evening, sometimes into the night. Sometimes, to insure I harnessed as many toxins as possible, I consumed at least 1/2 inch cube of cheese while I sipped the smoothie.

To help eliminate any of the toxins that may have made it to stomach and intestines, I ate 1 or 2, 1/2 inch cubes of no-salt raw cheese every 20-30 minutes through most every day.

I took photographs of my irises in June to see the effects of the forced toxicity inside my body and compared them with iris photographs taken prior to the abduction and injections.

My eyes have returned to metal-contaminated gray with lots of tarnished-looking toxins. My irises have not looked like that since the late 1980's, that is, before they changed to blue. It took me over 30 years of hard nutritional exploration to achieve the blue eyes that came with bodily cleanliness.

The following are photos of my left iris from June 2012 and pre-injections of May 2007. I did not take any photos of my irises from May 2007 to the time of forced injections in April 2009.

In the 2012 photo, notice all of the flared and fused grayish white tissue outside the inner circle of the pupil. All of that tissue indicates mass cellular death, organic debris and scarring. My body's cellular life went from about 87% alive to about 73% alive. Although my cellular average is much greater than other people at 65 years of age, a 14% decrease in cellular life in the body is devastating. It will take about another 7 years to reverse that damage. 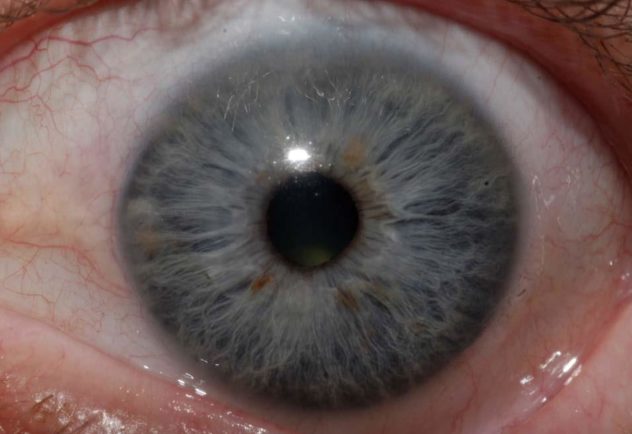 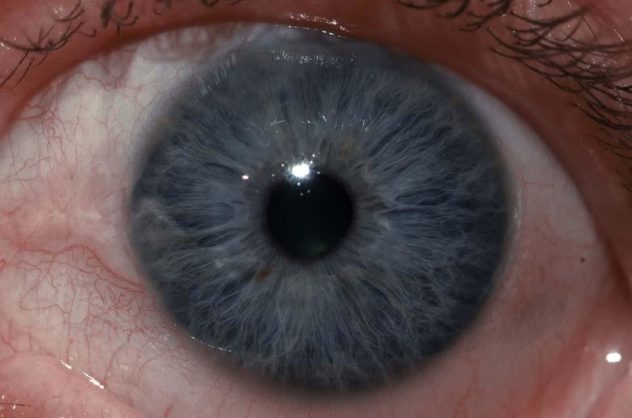 As I compared my present and past irises, I was very distressed that I am living in a world where some humans have no moral conscience and hurt me for pharmaceutical profits and people-control. They deserve no less than life imprisonment for their crimes.

Here is another person, a journalist Jane Burgermeister, who had 3 attempts on her life for speaking out against the Swine Flu/H1N1 epidemic and vaccine hoax.
http://mountzion144.ning.com/video/video/show?id=2127676:Video:1053980

The New World Order with its World Health Organization (WHO) is unconstitutional and renegade. Those who deploy it are terrorists and inhumane.