Since I was unable to have blood and urine analyses immediately after forced injections of April, 2009 (see Primal Diet newsletter Edition #17), I had to seek other means to determine some of what was injected. Usually within 1 month after toxic exposure, by using iridology, I can see in the eyes what parts of the body were damaged and contaminated, if the body stored the toxins. Normally, even for someone following the Primal Diet perfectly, gross exposure to toxins will result in internal damage and contamination. However, if a person is very fat, often the fat will chelate with the toxins and prevent inter-cellular contamination and harm. That is another reason I like to maintain a high ratio of body fat. Unfortunately, I had just experienced a detoxification that resulted in much weight-loss prior to the forced injections.

The sections of my irises in 2 photos below reveal that much of the contamination stored in my intestinal walls (all the little black spots). Note that the purplish cast around the spots indicates radioactive material especially in the second iris-section photo. (Purplish cast may appear purplish brown on some computers.) 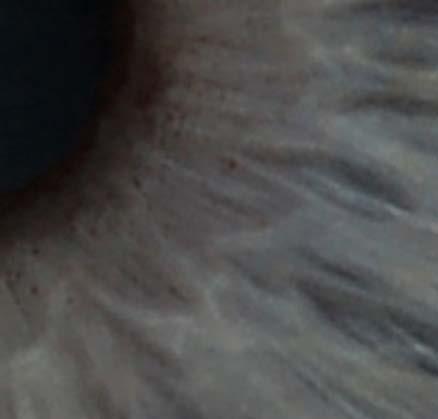 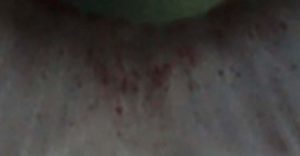 I experienced many bodily illnesses/changes after the forced injections that indicate the toxins permeated everywhere, not just the intestines. The mass freckles that I have now all over my body and many warts indicate that my body threw some of it out into and through skin after these toxins did internal cellular damage .

Our bodies discard many toxic elements by building them into hair. The toxic elements that are built into hair at any particular time could have entered our bodies as early as during gestation even if we are 100 years young. However, during a severe toxic exposure, within 30 days the body will incorporate many of the toxic elements into building hair. After several months of growth, hair analyses can reveal what the body discarded by building it into one's hair .

The results of hair analysis before and after the forced injections are below; hair was taken from my head in both analyses. Notice how almost all of the toxic elements increased exponentially, indicating that I was given a soup of injected poisons designed to create disease slowly rather than kill quickly. I cut hair from my right leg where so many of the toxins discharged, to gather evidence also but the hair sample was not enough for the lab. I asked the lab to return the deficient sample. After the hair grows foranother several months, I will cut more from my left leg, add it to the previously cut hair and have them analyzed.

Please do not be misled by the two different patient numbers. One is with my birthday numbered backwards; both are mine. I avoid using my name for self-protection and less likelihood for interference of tests.

Analysis of hair approximately 2 months prior to forced injections. 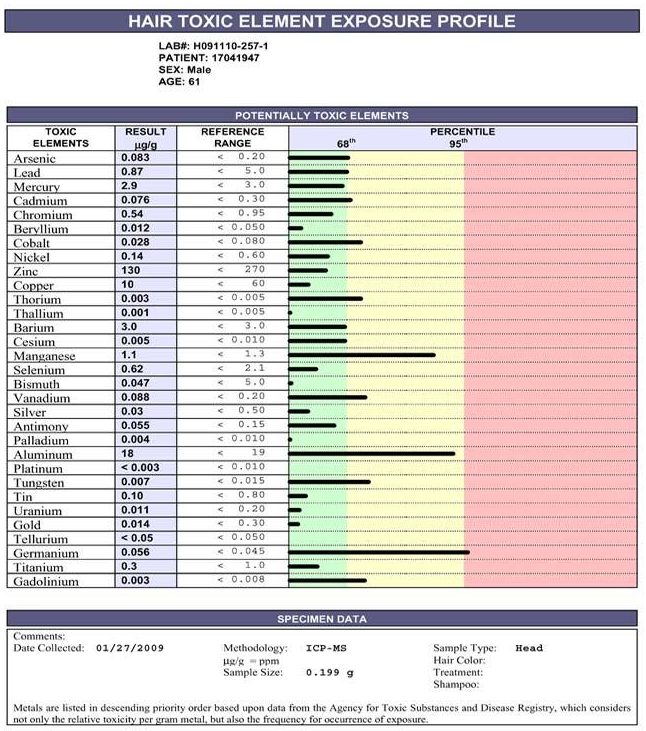 Analysis of hair grown up to 6.5 months after forced injections. 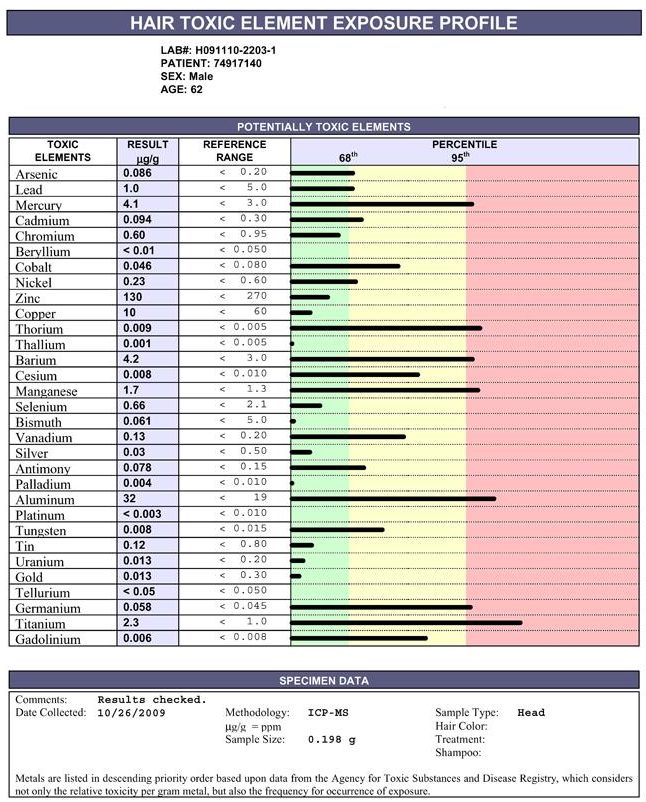 As of December 19, 2009, I am at the end of an 8-days cold-flu detoxification wherein the same types of sores I experienced after the forced injections erupted on my neck, scalp, shoulders, upper torso and arms. However, they were of the smaller variety experienced in the first 3 days after forced injections. My cold/flu symptoms began in the sinuses with burning, soreness, swelling and near constant nasal drip. Within 3 days, symptoms progressed to voluminous sinus, nasal and throat mucus discharges. After 3 more days, detoxification moved into my lungs with infrequent deep mucosal coughs.

However, sometimes in the morning, coughs lasted several minutes, discharging thick brown or greenish mucus. Increased eye pressure and redness fluctuated throughout. The open sore on the ball of my right foot subsided for about 3 weeks but is no opening gain and painful.

I continue to eat lots of butter/honey mixture, about 6 to 1 respectively. I notice that when I eat red meats at this time with restricted milk supply, I become lethargic. So, I mainly eat fish until I get so hungry I have to eat red meats for one day, then fish again for several days.