Journalism honored the oldest-known new dad of 96-years young when the Sun Times of India published a brief story about the birth of the man's second son in 2012. I waited and watched for the story to be carried by mass media. It has been 2 months since the first report in October 2012 and I found only 2 published stories about it. With all of the trite stories publish, why wasn't this important one published every where?Are we indoctrinated to believe that since it is a rare incidence, we should not expect to accomplish the same degree of health nor should we even look into it? Or was the story discarded because the truth could begin a ruinous trend to medical/pharma, food-processing, supplements, supermarkets and the HHS, USDA, CDC and FDA?

This “elder” man’s and wife's, by our standards, abilities to produce a healthy child holds many clues to truth about health and health independence. Due to so many “health”-minded alternative practitioners, as well as the unscientifically based FDA- and CDCrhetoric shouted by mass media and parroted by the masses that raw milk is innately dangerous, this documentation is at least revealing and inspirational. 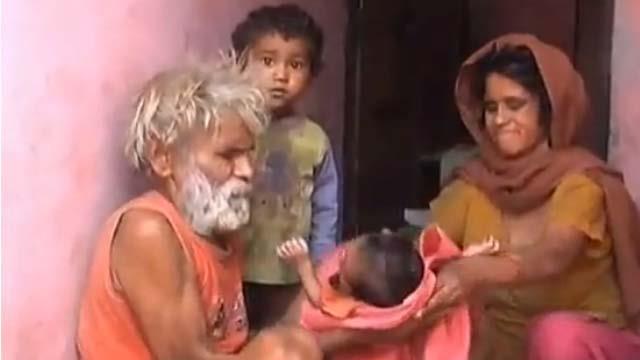 The 96-years-young new dad Ramjeet Raghav lives in India with his 52-years-young wife Shakuntala Devi. He is a farmhand who works long and hard days in the hot and sunny fields. Two years ago, he became the “World’s Oldest New Dad” when his wife gave birth to their first son when Mr. Raghave was 94-years young. The birth of his second son two years later reaffirmed his title.

Ramjeet said to a reporter, "I think it's very important for a husband and a wife to have sex regularly and when she asks I will go on all night…” He lives on a diet of raw milk, raw butter and almonds.

The few people I have known who lived their entire lives eating raw milk and raw butter maintain abilities throughout their lives that few glean. Here we have a man who lives mainly and merely on 3 foods, raw milk, raw butter and raw almonds. What does that say about the food-industry-owned USDA’s food pyramid?

The simplicity of such a diet appeals to me still but I was energetically unsatisfied when I tried the diet of raw milk, raw butter and raw nuts for over one year. I was unable to achieve the vigor Ramjeet does. However, it kept me vital and young-feeling and looking.

When I cannot get raw dairy, I acquire medium ripe coconuts and scrape the meat from the coconut shell. Then, I blend it with the coconut water. That smooth milk-looking mixture gives me some of the same pleasurable, soothing and calming properties of raw milk and butter. It serves somewhat as a raw diary substitute but not completely.

Nothing in all of my dietary exploration with myself and 98% of the people with whom I have worked has prospered more toward better health than with truly organic raw dairy with its many health-supplying nutrients. The evidence of its efficacy is the fact that the world’s oldest new father of 96 years remains active in work and sex while living mainly on raw dairy. Is he an exception to the rule? Yes but the rule is that mostly, people consume cooked and processed foods.

Empirical evidence in hundreds of thousands of testimonials proves that organic raw dairy supplies our bodies with vital nutrients not available in industrially-processed dairy. Thousands of so-called "at risk" people have reversed their conditions that placed them in the "at risk" categories by consuming raw dairy, including me.

There have been occasions when I and others have reacted with bloating and discomfort when eating dairy. Some people have eaten raw dairy without such symptoms for up to 10 years. Such symptoms are not a response to the dairy. It is not a newly formed allergy to dairy.

I found such symptoms to be a stomach and/or intestinal detoxification wherein the body uses its minerals in dairy to bind and harness toxins in stomach and intestinal walls. I suggest that when such symptoms occur, consumption of milk be reduced but not completely avoided. Those nutrients are needed, especially no-salt raw cheese with its concentrated minerals and raw butter with its healing fats. There have been times that I did not consume dairy because of such symptoms. However, to achieve the strength and endurance I want, I had to eat a lot more raw meat when I did not have raw diary.

Rawesome: One Week After the Raid
More Posts